I hope everyone had a great Thanksgiving holiday! You guys are definitely overdue for an update, so here it is.

Update 1.25.x: We’re putting this on hold to put most of our focus into creating the new web tool (below). Even though the updates are going to come slower for awhile, there's a ton of benefits for both education users and you guys!

The current test build (1.25.77) has a couple blockers still, but it has a lot of quality of life improvements, and is mostly stable. If you’d like a copy to use pm me and I’ll hook you up with a download / a list of the most notable known bugs to look out for.

GameSalad Curriculum: The last two units of the new curriculum are set for release this week, which is very exciting!

For those that don’t know what’s included:

It’s structured so that students learn important concepts while having fun building some tutorial games. The games range from a super basic maze game to a space themed platformer, and have detailed tutorial pdf’s to walk the students/teachers through how to build the games as well as introduce them to the different computer science concepts and how they’re utilized in GameSalad.

In addition to the pdf’s, there’s a set of videos that cover each part of each unit for students that fall behind, or in case people prefer watching videos to reading.

Computer Science Education Week: Computer science education week is coming up next week and we’ve been hard at work putting together resources so that teachers can run a successful hour of code activity with GameSalad in their classrooms. 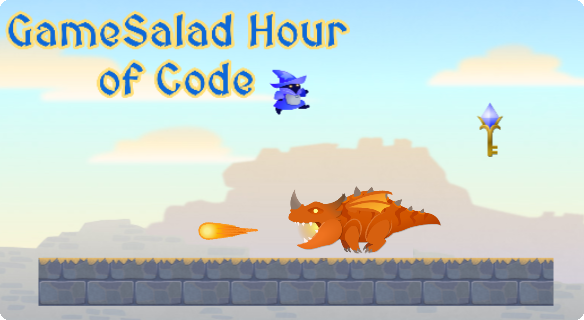 Increasing Staff: As you may have already heard, we’ve recently hired a VP of Sales & Outreach (Gretchen Thompson). She’s really excited to be here and some of her responsibilities will free up Carlos (previously hired developer) so that he has more time to work on programming.

She’s very knowledgeable of the education market and fits in well with our current team. I’ve asked her to give an introduction over here on the forums for you guys, but if you’d like to read her bio it’s up over on our team page.

In addition to Gretchen, we have Braydon on part time to help with the customer service side of things to free up Alexandra and myself more.

Web Version of GameSalad: Perhaps the most important part of this update. Here's a little more info about our ideas for the web tool and how it'll be good for everyone.

The technical team has been wanting to make this move for a while now and a few things have come to pass to make this possible:

So yes, things are going to slow down in terms of the current native Mac and Windows tools until the HTML5 tool is done. We won't be removing the current native tools until we get all of the functionally built into the new tools. But once we finish it, it's going to replace the two other tools as our main code base for tooling and this is an awesome thing:

We also have the opportunity to build in a few things that are required of a web tool that will be immensely helpful in your development.

Tan is looking at ways of storing your games on our servers that will let see the entire undo or save history (I'm still working out the storage and performance implications of how fine grained that storage will be). This means you get something akin to online source control for your games.

Since your game changes are being incrementally uploaded and saved online, you'll also no longer need to wait to upload your games during publishing, they'll be available to our servers immediately!

And while it won't be available in initial release, the manner in which we'll be streaming changes to the server will hopefully allow us to do google docs style simultaneous editing. I'm not gonna promise that one because editing a "word" doc is very different from editing a game.

A web based tool opens so many interesting opportunities for GameSalad Creator.

The freeze in existing tool development doesn't mean we'll stop working on the game engine. The HTML5 engine is going to get a lot more love because it's going to be your main "preview" engine. So it's going to have to match the "native" engines.

As for the "native" engines, we'll be able to add certain types of features that don't require a tool updates. For instance, Google Play Services support can be added (I'm working on that now on the weekends).

These kind of updates will be slower as the team focuses on the new tool, but engine maintenance and under the cover features will continue to happen.

Bugs that result from new versions of iOS and Android will be looked at. Anything that doesn't require us to change the tool like loading time improvements, ad networks (unlikely but it's the kind of thing that's possible) will be looked at as well.