Help me connect the dots with expressions

osakamitsu Member Posts: 70
August 2013 edited August 2013 in Working with GS (Mac)
I want to get a better grasp on the expression editor. I've read about the expressions in the manual and looked at some examples.

I also found this tutorial by Darren from Deep Blue Apps which is SUPER helpful but I am having trouble seeing how this relates to the real world sin and cosine that I have been learning about lately. I only made took college algebra so I never had geo, trig or calc. But I have been teaching myself lately on youtube and working problems on paper. But thinking back to the expression editor I am having trouble connecting the dots.

1. I have seen a couple of people on these forums say use the Pythagorean theorem (A^2 + B^2 = C^2) as a basic example to teach students the expression editor as a basic starting point. I under stand how to use it to find area in real life. But I heard you can also use it to find the distance between two actors. How would you do that? And what is an example of an in game situation that I would want to do that?

I also assume the point that gamesalad would use to measure something like this is the very center of the actor unless an offset specifically entered into the expression editor right?

And to enter the offset you would add a negative or positive value to the x and y positions of the center pixel?

2. How would I start to enter the Pythagorean theorem into the expression editor? What expression would I use? I couldn't just type (A^2 + B^2 = C^2) into the editor could I? Or do I say something like constrain the x and y values of actor A and then again for B. Then in the expression editor would I use an exponent to the second power to the x and y positions? or is it as simple as saying Actor A^2 + Actor B^2 = Actor C^2? Im totally confused by this thought process.

3. Video about GameSalad and sin and cosine: 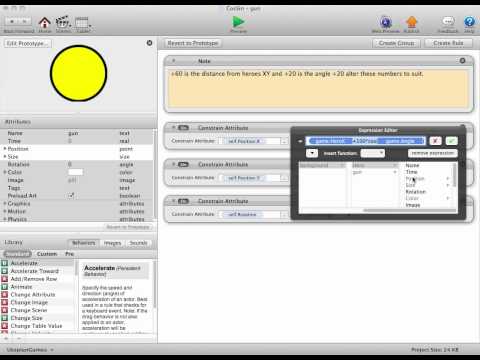 Referencing the video by Darren from Deep Blue Apps I see how he is using sin and cosine to rotate one actor around another. While I get what he is doing to a small extent, I dont see the big picture and how it relates to real world trig expressions. I understand how tan = opp/adj, cos = adj/hyp, and sin = opp/hyp are used to find angles and measurements on triangles. And I can see how the degrees relate to rotating around the actor in the video and how they relate to sin etc. But do I use "tan = opp/adj, cos = adj/hyp, and sin = opp/hyp" as expressions in the expressions editor? Or is it simpler than that even?

In the video Darren has the X constrained with game.hereX + 150 * cos game.angle

What does that mean exactly? The 150 is the offset I was talking about above. But why multiple the offset by cos? Is that saying multiply 150 times adj/hye? This isn't a triangle so is it using the 4 right angles around the 0,0 coordinate of a graph? I assume GameSalad is the upper right portion of a graph since 0,0 is the lower left corner.

I think I am overly complicating things but maybe someone can explain this to me like a child then I will have an AHA moment... Part of me wonders how much of what I just typed is complete nonsense too. lol