I would like to introduce the tool for 2D game developers I am currently working on.

Sprite DLight is a tool that generates instant normal maps from 2D sprites in one click.
This way, you could create a game featuring dynamic lighting on pixel art characters and objects, simply by processing the existing game art and using the normal maps in combination with a shader.

The pretty successful Kickstarter campaign for the tool will end in 6 days, all stretch goals are already reached.

Real dynamic lighting might not be possible for all platforms GameSalad supports, but Sprite DLight is also capable of re-rendering sprites for different environments, based on the generated normal map.

With this feature, the color and intensity of four ambient lights can be adjusted to fit the lighting conditions of the game environment, where the spot light is reduced to its directional component, which allows for consistent lighting for multiple frames of a sprite sheet.

There will also be an animation preview for sprite sheets, so you can see how they turn out with dynamic lighting.

This is a screenshot of the tool. The UI is currently being redesigned. 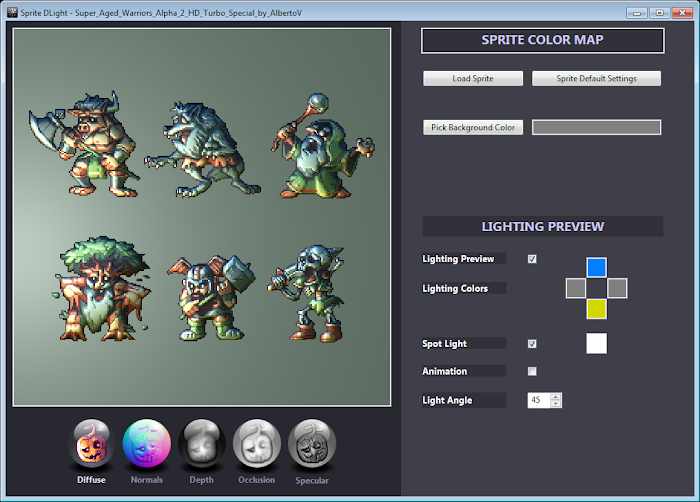 Sprite DLight's Kickstarter campaign will end next Friday at 4:00 PM CST, there are 5 days left to jump in for the beta and to pre-order the tool at the Kickstarter backer price.

I appreciate any kind of feedback and ideas for the integration with GameSalad.